Anything in here will be announced as soon as it changes.

Aquascape Construction Epoxy is a two-part epoxy putty that has been specially developed by D-D for use in salt water and freshwater aquariums and other underwater applications.

In the marine aquarium it is ideal for bonding together live rock to form complicated structures and avoiding rock falls caused by turbo snails, sea urchins and strong current flow, for preparing coral frags and for creating clam bases to prevent them being attacked and ultimately killed by bristle worms. In addition it can be used to repair leaky pipework, broken equipment or for bonding items to the aquarium glass.

Aquascape has been developed to be stickier than most epoxies so that it bonds easier to wet substrates and the purple version has been formulated to dry under water to the colour of coralline algae. This makes it initially more natural within a marine aquarium during the period before being encrusted with true coralline algae. Note however that when cured out of the water the colour will be darker representing the deep red coralline algae colour.

For freshwater aquariums and for repairing liners and preformed ponds, the Rock Grey version is perhaps more suitable however both colours can be used in any environment.

Applications for Aquascape in a Marine Aquarium

Aquascape is ideal for working with coral frags and can be used to fix corals to frag bases or direct to rock and is easily overgrown by corals or coralline algae.

If positioning large corals we would suggest that you apply the Aquascape to the coral and splash it around in a container of tank water to remove any residues before pushing into position.

Note: It is necessary to support heavy rocks, corals and overhangs until the putty sets.

Clams are very susceptible to attack by bristle worms, especially when positioned on a sandy or gravel substrate. If you have had clams die in the past then this is probably why as the worms attack the base of the clam at night and slowly eat it from the inside.

If an Aquascape base shaped to the individual clam before positioning on the base inside the aquarium, the clam will glue itself onto the Aquascape base and protect itself against any attack.

Snails, fish and urchins can cause movement and overturn rocks and corals in the aquarium therefore we always recommend that rock structures and corals are always bonded together to prevent rockslides damage or disturbance to the system.

Blobs of Aquascape can also be used to create feet on the base of the foundation rocks for increased stability and to lift the rock off the substrate thus preventing anoxic areas from developing. 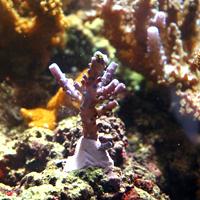 These photographs are simple raw phone images and were taken immediately after bonding a frag and a rock, using Coralline Aquascape, to illustrate it’s use.

The epoxy blends in much better than white products and within a short period of time will be covered by the coral or by coraline algae and will disappear completely as the material is very receptive to overgrowing.

The two sticks have a long shelf life but once mixed the resultant putty is at first soft and highly adhesive and then gradually hardens. Speed of hardening is dependant on temperature and at normal temperatures, 20-25C, Aquascape becomes semi hard in 3-4 hours, taking slightly longer at the surface when cured under water. Warming the mixed putty for up to 10 seconds in a microwave can accelerate the speed of curing.

Once fully cured Aquascape can be machined, drilled, tapped, turned, filed, sawn, sandpapered and painted if required and is heat resistant up to 130C. Aquascape will bond to any of the following materials: – wood, brick, cement, metals, concrete, rock, plastic, glass etc making it an excellent adhesive however it is not designed to be used as a thin layer bonding agent where a conventional glue is indicated.

If you have not used Aquascape before we suggest that you make yourself familiar with its behaviour before use within the aquarium. Mix a small amount and notice how sticky it is when first mixed then observe it over the next 2–3 hours. After half an hour it becomes rubbery and can be cut with a knife or scissors before becoming quite hard and tack free. Observe the change in colour when used under water. Overnight it becomes fully cured and sets rock hard.

Warning for use in a fully stocked aquarium

Always read the enclosed instructions properly before use.

CAUTION: Do not over manipulate in the tank in stocked aquariums as this may result in excessive clouding of the water due to the release of non-toxic talc fillers.

This excessive clouding may reduce oxygen, especially on smaller tanks and in 1:5000 cases can result in distress to fish and invertebrates or in extreme cases loss of livestock. If clouding occurs stop use immediately and aerate the aquarium.

Clouding is generally the result of continually trying to reposition an overhanging or off balanced coral that is unsupported whilst the epoxy starts to set.

There are no reviews yet.

Only logged in customers who have purchased this product may leave a review.